Almost all the youth in progressive countries have access to free education. Even young children from third-world nations still have access to quality education although not always for free. However, everything changes once you are a refugee. Aside from not having a home of your own after being displaced because of wars, famine, or other natural or man-made disasters, refugees have an uncertain future where they don’t even know where to get food to eat, more so in having a shot at getting an education. 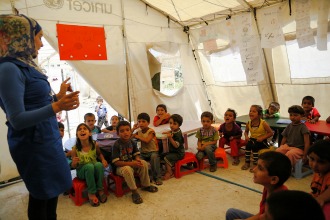 The life of a refugee isn’t easy. They have to make do with whatever is given to them out of other people’s generosity. Not all the time the government can provide everything they need to survive. It’s why going to school seems impossible when they barely have access to life’s basic necessities. Young refugees don’t normally go to school like typical kids. The places where they find asylum does not always cater to all their needs especially those of younger children who not only want to read and write but learn more about the big wide world.

Abbas and the other young refugees have been accepted in 93 schools across mainland Greece thanks to a transport scheme funded by EU Humanitarian Aid and implemented by the UN’s International Organization for Migration (IOM). The project started in October and now covers 32 camps.

“Before the launch of the programme, kids did not participate in any kind of formal education,” says IOM project coordinator, Iannis Baveas. “Before that, it was only non-formal education inside the camps. It’s very important because every kid has the right to go to school, and education is not a privilege, it’s a basic human right.”

The kids are taken by bus to selected schools located between two and 18 kilometers away. It takes Abbas about a quarter of an hour to reach Avlona elementary school, which has taken in 20 refugees from Malakasa camp in addition to its 235 pupils.

“Many of those children have never been to school in their home countries, which means they didn’t even know the basics about how to behave inside a classroom,” explains teacher Giannis Stefanidis.

Many refugee families struggle in making their kids understand the value of education because they didn’t even go to school in their home country and given the dire situation they are in. Moreover, there is no assurance as to how long they can stay in that particular place. They all have to persevere to change their fate and not allow their misfortune dictate the direction their lives are taking. With education, they can turn their life around and save the future generation from living a miserable life that they have lived so far.

Now 19 years old and resettled in the U.K., she is not only working hard on her own education but championing the cause of refugee education around the world.

Almellehan was appointed as youngest ever UNICEF goodwill ambassadoron June 19. She is also the first UNICEF ambassador with official refugee status.

“Goodwill ambassadors must exemplify good citizenship and be passionate, courageous, inspiring, caring, principled, credible and capable of acting as influential advocates for children,” said Georgina Thompson of UNICEF. “They must demonstrate leadership in their professions and show enthusiasm to use their professional prestige and networks to promote children’s rights. […] Muzoon fills this criteria perfectly.”

As a goodwill ambassador, Almellehan will advocate at events like the upcoming G20 summit for children affected by conflict or disasters to have safe places to learn, aiming to help influence policy and increase investments into this field.

The government should have education at the top of their list because educated individuals become productive citizens later in life. They can contribute to the betterment of society and help bring about the changes desperately needed by the country regardless if they are refugees. It’s the reason why government funding is crucial to help schools cater to the needs of the youth who want to learn the ways of the world even if they have to spend most of their young life in the four corners of the classroom absorbing everything they need to know to prepare them for adult life.

No comments yet
Access to Education Educating Refugees Free Education