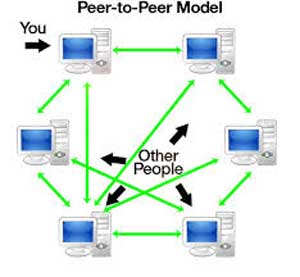 Although peer-to-peer networking has picked up steam as a low-cost, low-maintenance alternative to client/server networking, the stark differences between the two options are worth noting before buying.

Peer LANs allow networked users to share each other’s disks, printers and other resources without requiring a dedicated server. Each user’s workstation functions as both a client and a server.

By comparison, a client/server LAN revolves around a centralized server for operations such as user login, file sharing and E-mail, as well as the storage of applications. All networked PCs function as clients to the server.

Peer-to-peer LANs have several advantages for small groups of users over the more complex client/server solution, according to William Donahoo, director of marketing for Novell Inc.’s desktop systems group in Provo, Utah.

“A peer LAN is an inexpensive and simple solution,” that is “good for certain services such as file and print,” Donahoo said. Novell’s market-leading NetWare costs $1,095 for a five-user license, while its NetWare Lite peer offering is priced at $99 per user or $495 for five users.

Easy maintenance is another reason people opt for peer-to-peer networks. Installation and maintenance can usually be performed by an end user, as opposed to requiring a network specialist for a dedicated server LAN.

Peer-to-peer networks eliminate the “administrative nightmare of keeping track of all clients,” said Sayuri Tung, director of product marketing for Sitka Corp., the Alameda, Calif., maker of the MacTOPS, DosTOPS and SunTOPS peer networks. “The end user does the configuration, and when you install a new node, the new user is announced to the network. In a client/server LAN, you have to have the administrator activate the node,” she said.

Yet despite these advantages, peer networks aren’t for everyone. To their disadvantage, they traditionally lack the performance and high security of client/server networks. When a PC processor on a peer LAN handles requests from multiple users, its operating speed and network performance can be cut drastically.

For this reason, applications that generate a lot of network traffic are usually better served by client/server LANs, experts say. “If you are running standard DOS-based applications and have four or five PCs, your needs are such that peer-to-peer is adequate and cost-effective. If you are running heavy database applications and you have in place the hardware that is appropriate for a client/server LAN, you will want to take advantage of that,” said Kim Willis, product manager for the LAN division of CBIS Inc., the Norcross, Ga., maker of the Network-OS Plus peer LAN.

Some peer LAN vendors are bridging the gap by adding a dedicated server to a peer LAN. In such a configuration, users would still be able to access each other’s resources, as well as the processor-intensive applications stored on a server.

D-Link, of Irvine, Calif., will add such capabilities when it announces LANsmart version 3.3, with a dedicated file-server system, at the NetWorld show in Boston this week. “This will still be a peer-to-peer network but will have the advantages of a client/server system,” said Steven Joe, the firm’s marketing manager.

Yet faster PC processors, available at ever-diminishing prices, are easing the speed degradation. “All of a sudden, people have the horsepower to operate in a peer environment without diminishing the speed of the machine,” said Robert Wight, general manager of Archive Software Division, an Archive Corp. subsidiary in Lake Mary, Fla.

In addition, peer LANs are beginning to adopt some of the features previously found only in server-based networks: Windows support, links to other LANs and support for new peripherals.

Novell, for example, recently announced NetWare Lite version 1.1 Utility for Windows, which runs on top of NetWare Lite to fully support the Windows file manager and provide a graphical interface. The utility will be integrated into NetWare Lite in future releases, said Donahoo.

Peer packages are also addressing links to other networks. “Connectivity to other platforms is something that resellers and users have been asking for over the past 12 months,” said Joe Waldygo, director of marketing for Artisoft Inc. in Tucson, Ariz. Artisoft now offers LANtastic for NetWare, LANtastic for Macintosh and LANtastic for TCP/IP to provide such links. Peripheral sharing on the rise

Developers are also adding the ability to share all peripherals, such as CD ROM drives and modems. Network-OS Plus, for example, allows users to share a modem without interrupting the workstation where it is connected. NetWare Lite 1.1 now supports sharing a CD ROM drive. Similarly, the next release of Windows for Workgroups will allow users to share modems and scanners, said Weed.

Compared with client/server LANs, however, the security features in peer LANs are rudimentary. In NetWare Lite, users have full rights to read, write and execute files; read-only rights to read and execute or no rights at all.

“NetWare Lite is light on security,” said Vanessa Swancott, product manager for the Ethernet product line at Xircom Inc. in Calabasas, Calif., a maker of Ethernet adapters. Xircom’s Network Simplicity system includes NetWare Lite with its adapters. “In the manual, there is [only] one page on security,” she said.

And tape-backup software for peer networks must be purchased from a third-party firm. By comparison, NetWare 3.11 includes SBackup, a basic backup and restore utility.

Adding too many new features, however, could deter would-be users of peer networks, said Novell’s Donahoo. “A lot of peer-to-peer environments are being implemented where people have existing hardware they want to get more out of.” If vendors add too many features, he said, the hardware requirements to run the peer LANs will increase, and so will the cost.

No comments yet
advantages client/network p2p