Religion makes the world go round even if we don’t acknowledge it. While most of us want to believe that it is politics that shape the world at large, we are actually mistaken as religion has shaped human societies throughout time, from primitive life to our modern world today. Even nowadays, religion still affects the decisions of the state and people rely on religion to help them survive some really bad times in life. 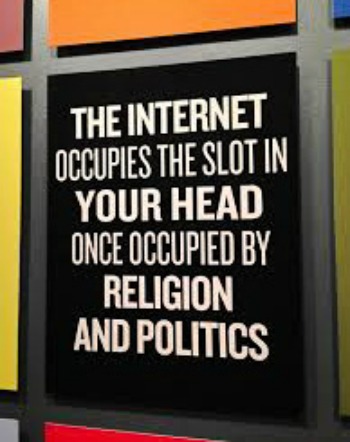 But as we become more engrossed with our smart gadgets and devote all our free time to the web and various social networks, people spend less time in church or reading the Gospel. Strengthening our spirituality is put aside and most of us now prefer to browse the web for all the most recent viral content and to stay updated on the lives of our friends and everyone we follow on social media. People used to go to churches at least every Sunday but that is rarely happening anymore. Instead of praying, many vents out their feelings on status updates or nonsense rants on social media.

Young social media users are less likely to commit to one religious tradition than those who do not use social media, according to a new study by a Baylor University researcher.

Young social media users are more likely to pick and choose religious beliefs and practices, even if those beliefs are contradictory, sociology graduate student Paul McClure said in a statement about his study.

“I think technology tends to give individuals so much control over their life’s circumstances and presents so many options before them that people feel empowered to approach religion with a cafeteria-style mentality,” McClure said.

Social media users are between 50 and 80 percent more likely to be flexible about various religious beliefs and practices, according to his findings.

However, despite the apparent absence of people, especially the youth, in churches and other official pastoral celebrations, you can see a lot of pages on social networks that talks about religion and spirituality that have millions of followers. It only goes to show that people still have faith in spirituality although they rarely go to church anymore. It is why even the church set up their own social media accounts to stay connected with the people and the changing times.

Cambodia’s Buddhist monks have taken to social networks in a big way to drive their traditional role in activism and champion causes, overcoming a lack of support from religious authorities and some apprehension from politicians.

A new report in the peer-reviewed journal Conflict, Security, and Development, published by King’s College London, takes a deep look at the way monks are using social media to expand their historic connection to activism, with Facebook emerging as the platform of choice for a new generation of net-savvy monks in a country where almost a third of the population is active on social media.

As they say, if you can’t beat them, join them. And that’s just what the church is doing to stay close to its people. Through social media, the people remains aware of the different religious activities celebrated by the Church and keep the people informed of the message of the Gospel.

Over the Easter weekend, the Church of England encouraged its congregation to share photos of their services and celebrations on social media using the hashtag #EasterJoy. It’s not strange for a large organisation to interact with its members and promote its message in this way. But the democratic nature of social media is allowing the church to play a much more unusual role in such a traditionally hierarchical body.

Social media offers much more space for congregations to actively engage with sermons by tweeting along, asking questions, sharing photos of church activities, or continuing discussions throughout the week, not just on Sundays. For example, between 2010 and 2015, the Big Bible Project hosted online conversations about the bible for local reading groups and encouraged people to share digital case studies of personal experiences. More experimental parts of the church have held online services and used streaming to reach people who can’t be there in person.

As well as becoming part of church practice, social media is taking church activities back out into the online world. Faith is a full-time activity and social media is part of our everyday lives, so it is not surprising that the two can overlap. For example, church members can use Twitter to share insights from the bible or stories of their lives within the organisation, but they can also bring their Christian viewpoint to discussions on local, national and international politics.

Social media can be a good or bad thing depending on how you use it. While too much of something will never do people good, we can counter the negative effects of this addiction by bringing the word of the Lord closer to the people. Religion may be a controversial topic for many but it is actually our faith that matters most. If we can grow our spirituality by using social media right and by connecting with people and organization that helps us stay close to our faith, it can help us stay grounded and strong in our faith no matter what temptations we may see on social media or all around us.

Religion will probably remain a prominent aspect of human life despite all the adversities it faces each day. People need to believe in a force greater than anything in this world to save them from all their troubles and give them hope of a better life someday. Social media may make the world go round today but religion will remain to be the strong force that allows people to face each day with a smile on their face despite the ups and downs of life.

No comments yet
Religious Practices Social Media and Spirituality