The public knows about various goods and services because of advertising. Businesses actually spend a great deal of money to make sure their brand is seen by people everywhere, from traditional billboards, newspaper and magazine spots, TV commercials, and these days, the web is the new and best platform to get your business noticed by everyone. 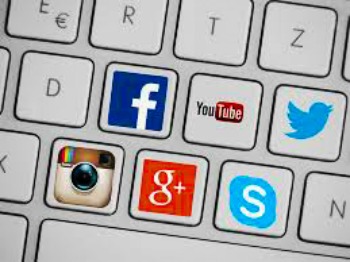 E-advertising, online advertising, online marketing, web advertising, Internet advertising or plainly called e-word of mouth, advertising on the web is the best thing any business can do to grow their business and take advantage of the various tech innovations to their advantage. There are different tools one can use without spending a fortune. Social media is one of the easiest and cheapest platform and most businesses are going crazy in promoting their brand here and there.

Large and small companies may leverage an investment in social media marketing differently, according to HubSpot. In fact, these average differences in the way companies of different sizes portion their budgets help to illustrate how SMBs have used this kind of online advertising and marketing to help level the playing field between themselves and their larger competitors.
For example, HubSpot reported upon these differences between the way that smaller businesses and large enterprises have allocated their budgets:

Small companies were likely to spend 2x as much of their overall marketing budget for online advertising on social sites.

Enterprises were likely to spend far more money on such outbound advertising tactics as mail, phone marketing, and trade shows.

The figures from HubSpot do demonstrate that SMBs find online advertising an economical way to run an ad campaign, expand their reach, and even interact with prospects and customers. At the same time, they can’t expect to operate exactly the same way that big companies do.

Everyone is on the web nowadays. People spend a great deal of their time online, whether for work or just plain browsing. It is why businesses are also taking advantage of online advertising because traditional advertising just became far too expensive but does not deliver the results most businesses are after.

In the tangled ecosystem that is online advertising, such nefarious websites collectively reap billions of dollars annually bilking advertisers. Many large companies wouldn’t want their ads financing distributors of misleading news, deceptive or counterfeit products, pirated movies and TV shows, or extremist groups. But that’s exactly what happens every day.

Media companies and their advertisers are shortchanged $8 billion a year because of scams, or more than the estimated combined revenue of Lionsgate, Paramount Pictures and MGM Studios.

Advertisers think they’re getting the desired views and clicks. But companies taking closer looks are finding unwelcome results. Websites where ads appear are visited by robots — computers hacked to impersonate real browsing behaviors. Others traffic in content people crave but upstanding businesses wouldn’t want to support, such as bootlegged movies or terrorist propaganda.

“A lot of advertisers don’t look that close because there’s so many websites involved,” said Erik Mekkelson, who bought the ads for the tech firm. “There’s hundreds, thousands of websites. And these are sneaking through.”

The set-up is siphoning potential revenue from legitimate media companies to shady ones. And it’s enabling hucksters to profit in fake newswriting and piracy thanks to ad views.

The web remains to be a major force in the world today. And it is not always a walk in the park when you do business online. The web is full of scams and scandals that would put even the most liberal person to shame, not to mention the part of the dark web where many cyber criminals like pedophiles abound.

But still, e-advertising remains to be the most practical thing to invest in these days for businesses because people frequent the web almost daily whether through their computers or their mobile gadgets. And for many, social media marketing, particularly with video has been a fast favorite because everyone is on most social networks that you can be sure your ads are seen by virtually everyone on the web. And most of the time, when people see something they like, they tell others too and it’s like a chain reaction after that and it’s what businesses keep rolling despite the competition.